See As we Saw: “Mummy Lama” of Spiti Lives on…

Inside in a glass chamber was the mummified lama, lovingly called “mummy lama.” Bowing our heads we felt blessed at his divine presence...

Ever since I read a captivating news report about a 500-year-old mummy, believed to be of a holy lama, discovered deep within the cold desert of Spiti in Himachal Pradesh, it had been my earnest desire to see it first hand. As we planned our jeep safari across the high roads of Lahaul & Spiti region, we kept pondering whether of not we would be able to reach out to this Himalayan remoteness.

"Sirji, I've never been there and being a restricted border area, we would perhaps require permission from the Indo-Tibetan-Border-Police (ITBP)," mentioned Surender Thakur, our guide-cum -driver-cum-friend to my utter disillusionment. But comforted me by adding, "Don't worry; we’ll inquire at Kaza (sub-divisional headquarters of Spiti). If we are destined to have 'His' holy darshan nothing should stop us." 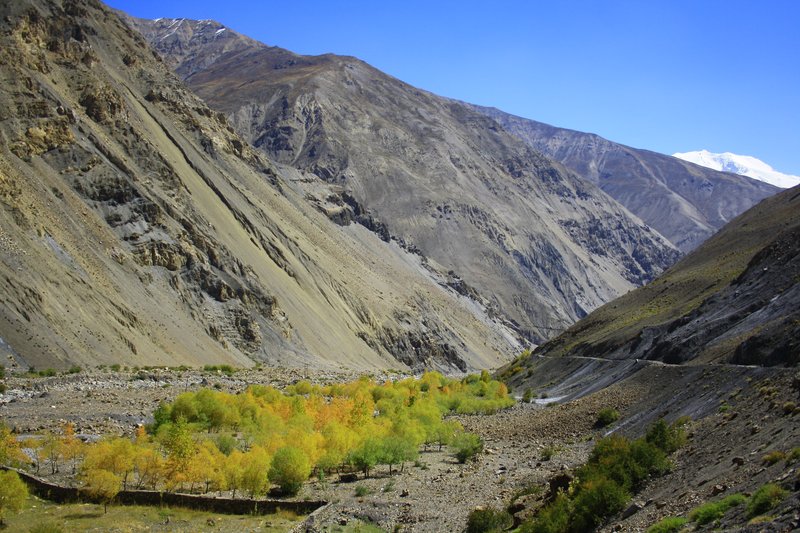 Next day, we ventured out from Kaza, driving through a literal moonscape. Strange “out of the world” formation of the barren landscape was a visual treat. As we moved ahead, our hearts were pounding fast. Just before Sumdo, we took a side road to our left to be greeted by a colourful arch - “Welcome to Gue Village.” “Sirji, we have made it,” said Thakur Bhai, seeing our excited facial expressions. 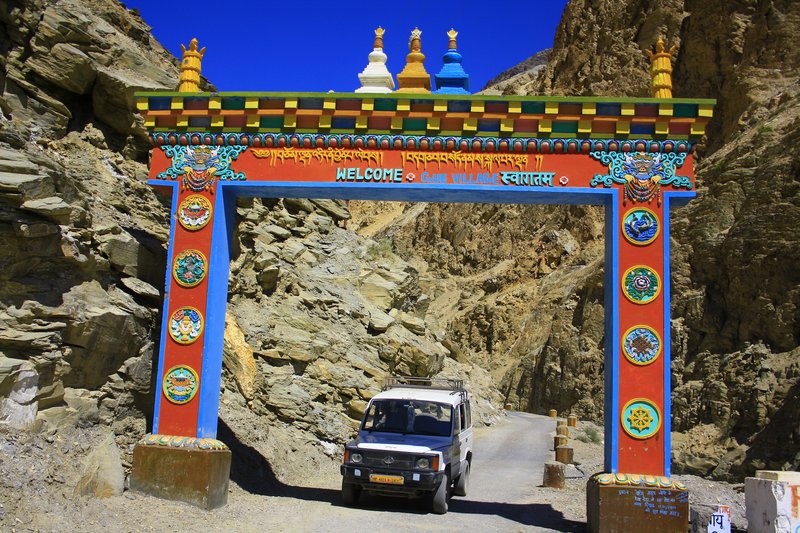 At the edge of the quiet village we saw a small concrete structure, guarded by ITBP personnel. Inside in a glass chamber was the mummified lama, lovingly called “mummy lama.” Bowing our heads we felt blessed at his divine presence. A closer observation reveals that the mummy is amazingly well-preserved with unbroken skin; teeth, nails and hairs fully intact. 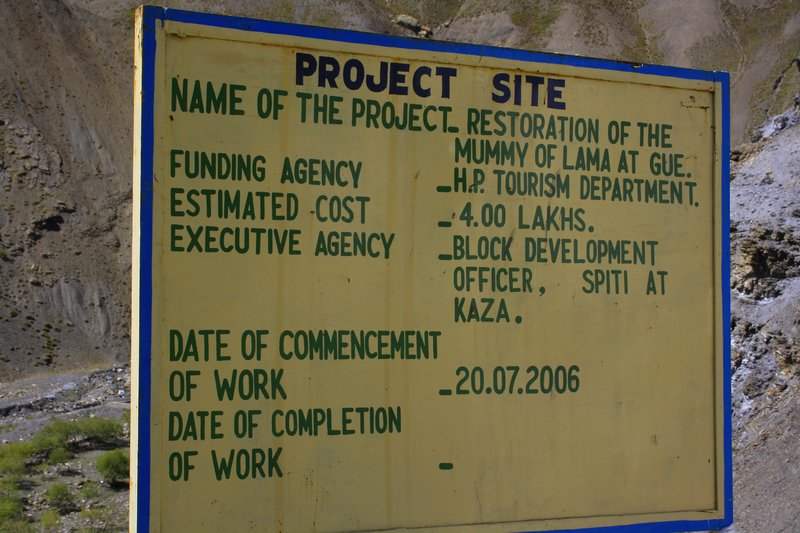 It is believed that this revered lama was a Tibetan monk named Sangha Tenzin, who gave up his life about 600 years back while meditating in the squatting position he was discovered mummified inside a tomb. The locals of Gue knew about the mummy since 1975 when an earthquake brought down a part of the tomb. But its sheer remoteness kept it out of bounds. Carbon dating carried out by some foreign scientists estimated it to be about 550 years old. 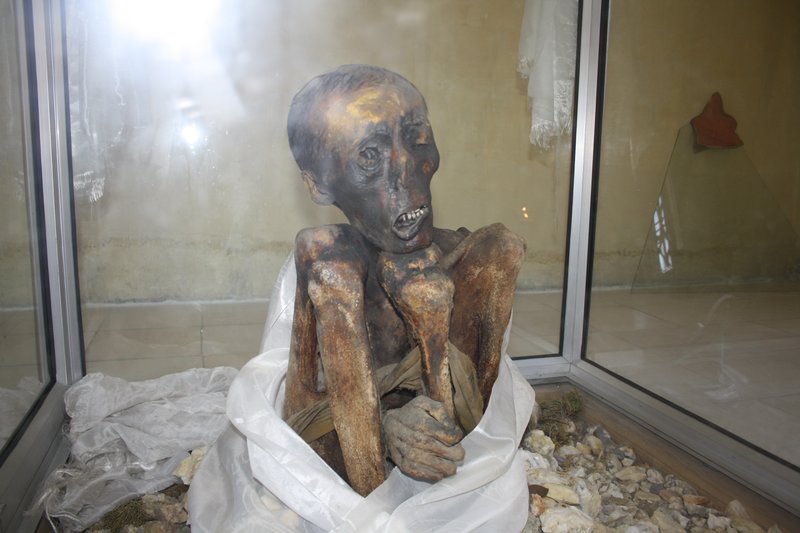 According to local legends, about 600 years ago when Gue was troubled by scorpions, Sangha Tenzin squatted down to mediate in the prescribed manner, after asking his disciples to entomb him. It is believed when his soul left the body, a rainbow appeared across the sky and the scorpions mysteriously disappeared from the village. 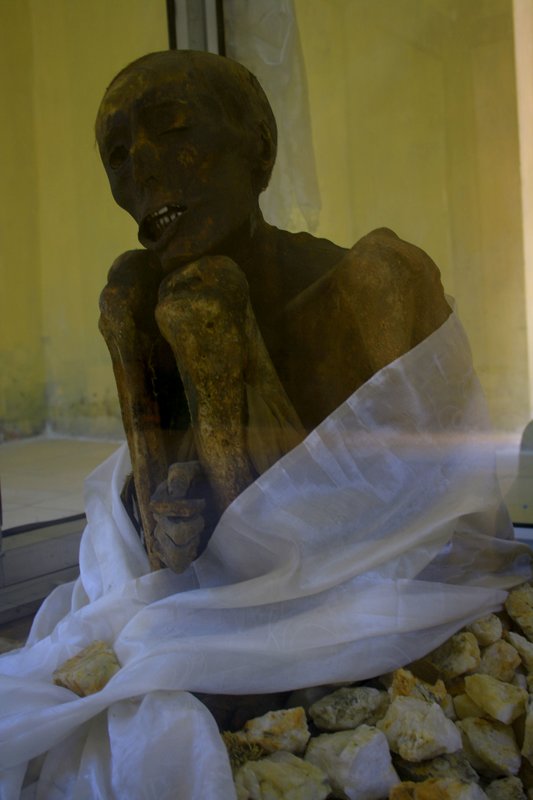 To Good to be True

I asked an elderly local, “How old is this mummy?” “Son, it is difficult to say, may be 500 years, 600 years or may even more, in fact no one knows how old he is, but he has been blessing our village down the ages.” He added with an astounding faith, “He is our living God, his nails and hairs still grows.” With a mixed feeling of being blessed yet thoroughly mystified we moved on. 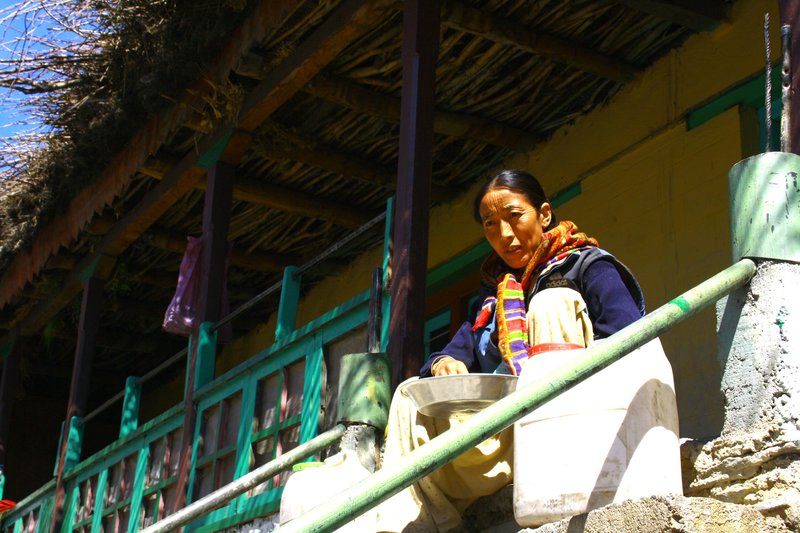 A Lady of Gue Village Carrying on the Daily Chores

Some time back, I came across a disturbing news report that fungal growth has set and if not properly preserved, this ancient relic could be lost forever. In fact, out of fear of being stolen, the villagers of Gue, directed by their local devta (deity), a few of months back, shifted the priceless “mummy lama” to its earlier location inside the Gompa where it had been lying undisturbed for the past over five centuries.

They feel that it is no longer safe to leave it unguarded and closed it from public viewing. It would be decided later, whether or not to allow public viewing of the mummy, as per the direction of their local devta.

Feel really blessed that we were among a lucky few to have “His” holy glimpse. Only time will say whether or not anyone again would ever be able to view the mystical “Mummy Lama” of Spiti who continues to live on…

Gue is one of the most isolated village of Spiti, lying very close to the border of Tibet, about 50km from the Tabo monastery. Coming from Shimla side by the NH 22 – the old Hindustan-Tibet Highway – take the side road after crossing Sumdo. Coming from Manali side on the NH 21 divert at Gramphoo to enter Spiti and drive through Kunzum La pass, Losar, and after crossing Kaza take side road to Gue Village before Sumdo. Distance is about 430 kms from Shimla. Approximately 250 kms from Manali.

Place to Stay
There are no place as such to stay in Gue village, nearest stopover can either be Kaza or Tabo, situated in the remote Lahaul & Spiti district of Himachal Pradesh.