Chitkul is the last Indian habitation beyond which lay sheer wilderness towards the Indo-Tibet borders.

A dusty signboard read Chitkul, Population: 610. This was the first sight that caught our eyes as we entered picture-postcard Chitkul. Perched at a dizzying height of 3600 meters, Chitkul is the last Indian habitation beyond which lay sheer wilderness towards the Indo-Tibet borders. 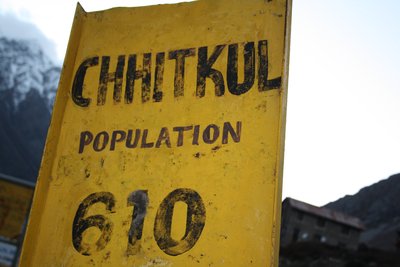 Situated at the banks of the Baspa river, meandering through the deep interiors of Kinnaur district of Himachal Pradesh, Chitkul is but a paradise on this very earth. To reach this remote heaven one has to fork out from the NH 22 - the old Hindustan-Tibet Road - beyond Tapri, entering the Baspa Valley.

We started off from Sarahan, about 175 kms from Shimla, that quiet morning, after seeking our blessing at the ancient Bhimakali Temple. Our destination was Chitkul via Sangla. Traffic was sparse as the Sutlej rumbled alongside breaking the silence.

Ahead were rows of snow-clad Himalayas. The landscape was breathtaking. We passed by the small town of Bhavanagar to reach Tapri, where we stopped for tea. Scaling ahead, we took the right diversion at Karchham, entering the Baspa Valley. We soon had our first glimpse of the rear view of the Kinnaur Kailash peak, revered both by Hindus and the Kinnauri Buddhist. It was sunny with the snow-covered peaks standing tall in the backdrop of a deep blue sky. 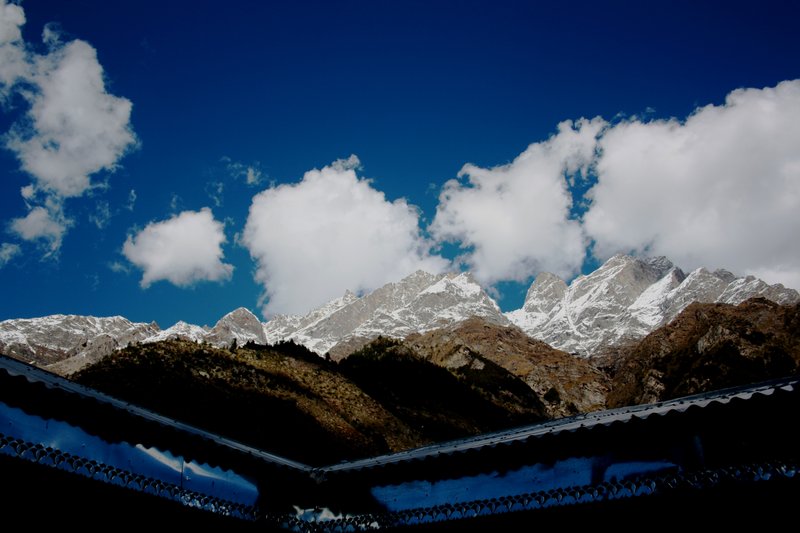 As we approached Sangla, we passed by many apple orchards, with red apples literally clinging to every branch. Sangla, situated at a height of 2,700 meters, is a small picturesque hamlet with the Baspa river flowing alongside. The entire Baspa Valley with thickly forested slopes of Pine and Deodar trees is widely acknowledged as one of the “most beautiful valleys in the world”. 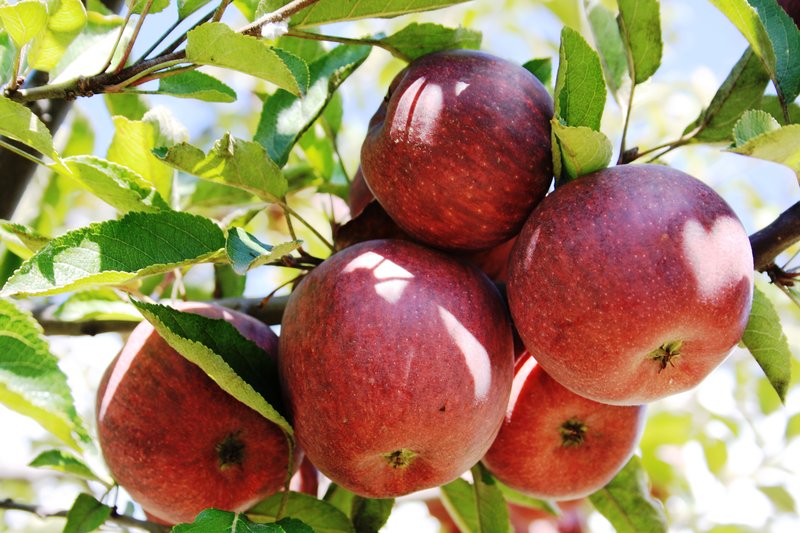 Dropping our bags we trekked through the by-lanes of sleepy Ru village, which was confusing at times, but the sweet Kinnauri locals guided us through. We were amazed at the Kinnauri homes with its intricate wood carvings with black slate-sheet roofs. Reaching the banks of the Baspa we soaked ourselves simply gazing at its greenish-blue water gushing along. 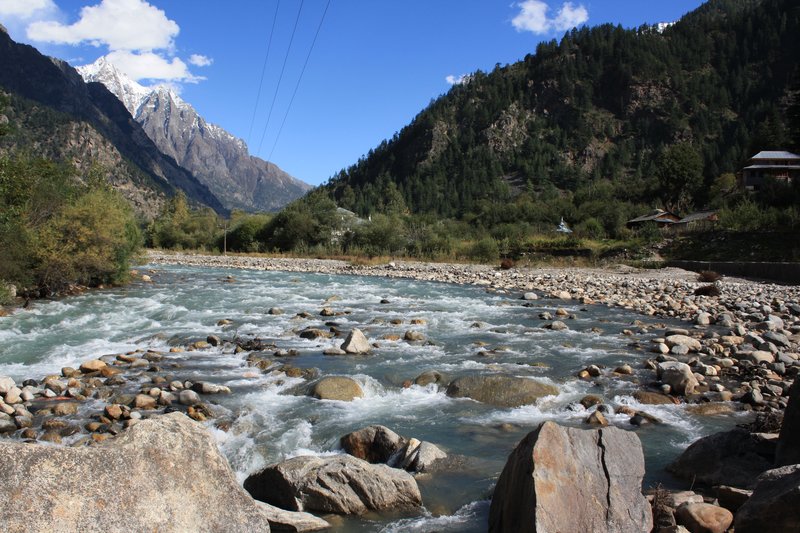 Later, we hiked up and visited the much-revered Bairang Nag temple situated alongside a Buddhist temple of amazing wooden craftsmanship -the peaceful co-existence of Hinduism and Buddhism clearly amplified. 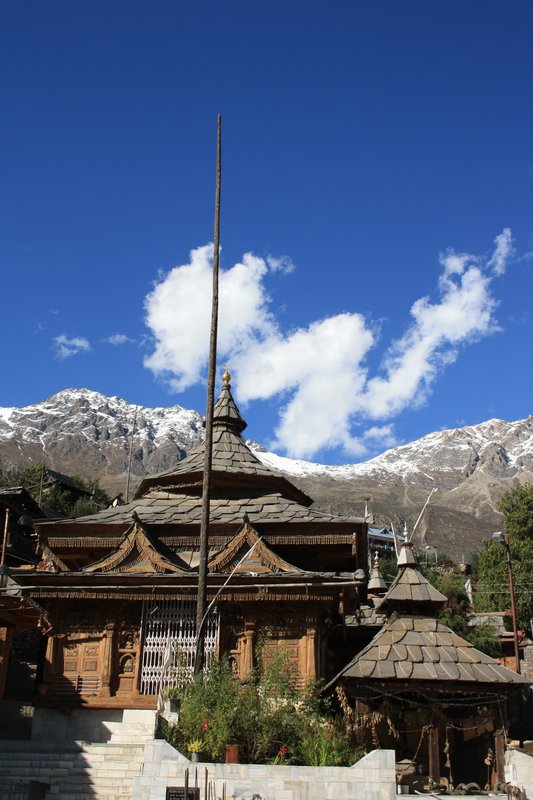 Sitting by the balcony of our guest house we watched a heavenly sunset. As the last rays of the sun touched the Kinnaur Kailash peak, the plethora of colours that it emated would be etched in our minds forever.

Next morning post breakfast, we decided to visit the Kamru Fort and were dropped at the base of the Kamru Village. The famous Kamru Fort is located high up the village and one has to trek up to visit this high altitude temple. The climb was naturally very steep and finally we reached the main gate of the holy Kamru Fort. A person rushing down from the temple premises offered us some prasad - thick bajra roti layered with yak butter – saying it is the offering to the Goddess Kamakshya Devi. We really felt blessed at the timing of the “holy prasad” being delivered to us by the holy mother - just as we at her gates - after an arduous climb of over one hour.

The caretaker of this temple, Rajender Singh, welcomed us warmly and said that as per local tradition, one has to cover the head and tie a saffron thread around the waist before entering the temple. Sweetly, he offered us two Kinnauri caps which we adorned and tied the thread around our waist as informed. 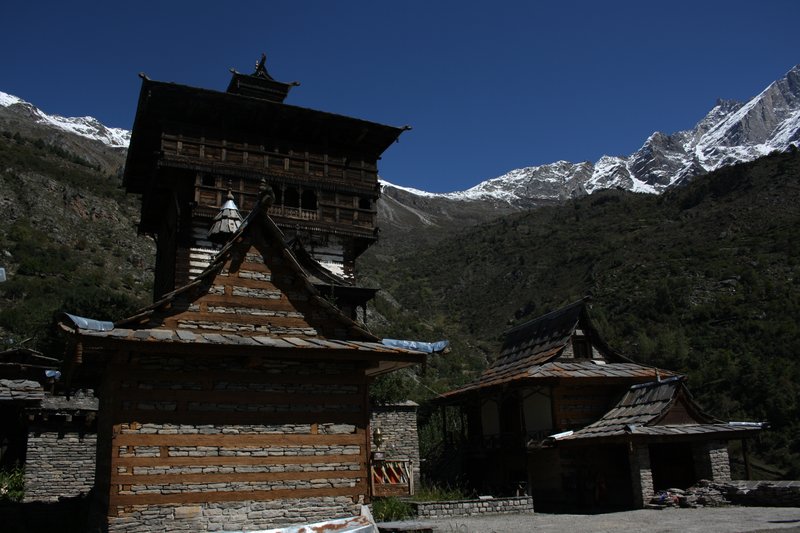 The tower-like Kamru Fort standing tall in this scenic landscape looks daunting indeed. The main holy deity of the Kamru Fort is Kamakhyi Devi. It is said that the idol of Kamakshyi Devi had been brought from far away Guwahati, in Assam, known in ancient time as Kamrupa.

Incidentally, the name Kamru perhaps had its origin from the ancient name of Kamrupa. We being from Assam - our home state - were elated at the ancient spritual connection between our lands and Himachal. Offering our prayers to the holy mother, we silently sat at the premise of this serene place of a by gone era, and encapsulated the sights both in our minds as well in the camera.

Thereafter, we moved towards Chitkul. Though situated at a short distance of about 26 kms from Sangla, road condition was bad and driving had to be slow. Gradually, we passed by the Rakchham village and a few odd kilometers ahead, we reached a clearing. 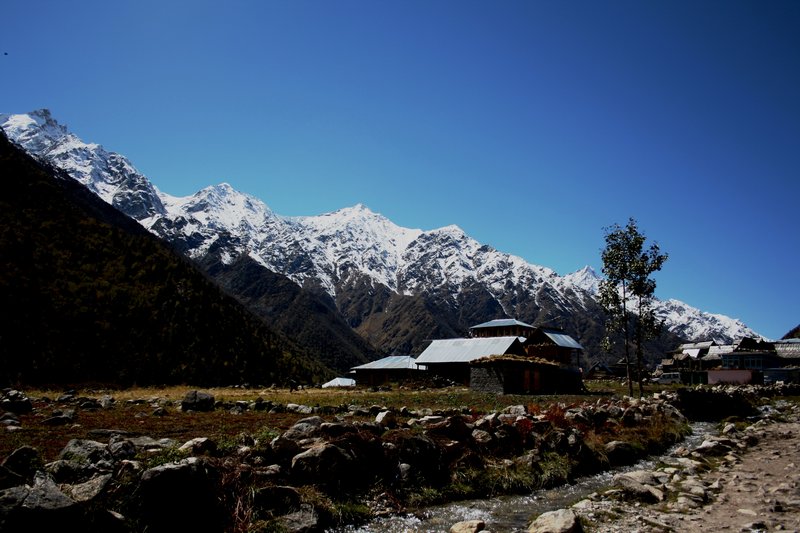 The view in front of us was simply mesmerizing – a green alpine meadow, with the azure water of the Baspa flowing alongside in the backdrop of snow-clad Himalayan peaks. On our right side in these idyllic settings was cute Chitkul - the last Indian village. The road ends here. 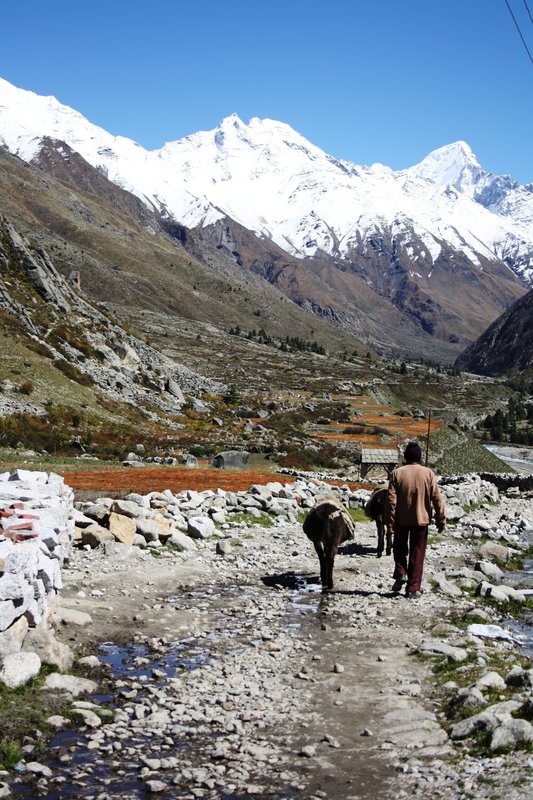 The serenity of the place was immediately felt by us – the sheer feeling of oneness with nature. We headed out nearer to the mountains and sat by the Baspa in total solitude. 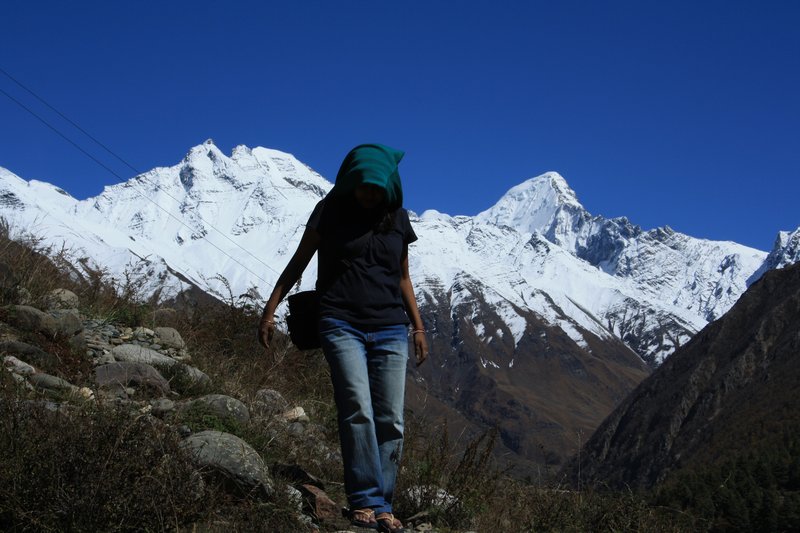 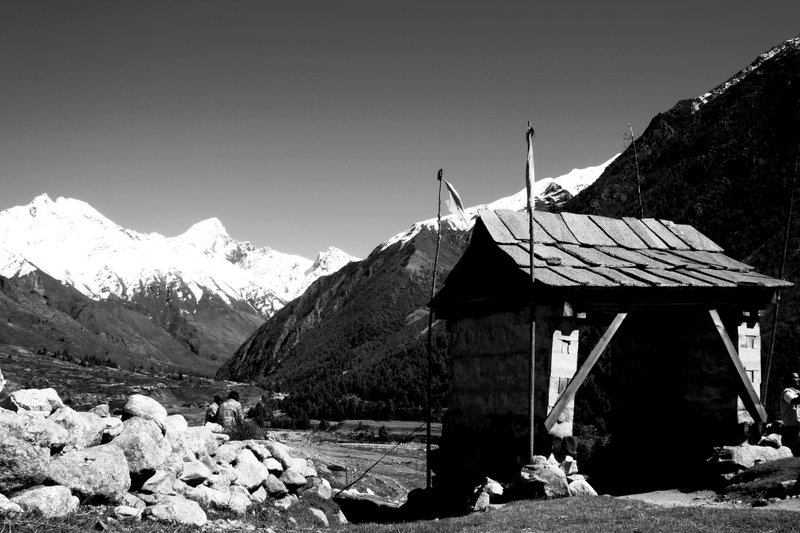 An evening campfire ignited our spirits as we heard many a local myths and legends.

Next morning, we started off to our next destination, Recong Peo, with a deep satisfaction of being able to leave behind our footprints in this last frontier village of India.

How to Reach: Chitkul is about 255 kms from Shimla. Follow the NH 22 till Karchham via Narkanda, Jeori, and Rampur. At Karchham, take a right diversion and go via Rakcham and Sangla to reach Chitkul.

Where to Stay: A few hotels and resorts. Also, booking can be done at the HPPWD Guest House.

Previous Next Table of contents

Comments on this blog entry are now closed to non-Travellerspoint members. You can still leave a comment if you are a member of Travellerspoint.

If you aren't a member of Travellerspoint yet, you can join for free.